skip to main | skip to sidebar

Power in our Hands

On April 13th 2016, Exeter Phoenix Arts Centre was flooded with people using British Sign Language, coming together to celebrate the showing of two special films. Carolyn Denmark, from the British Deaf Association introduced the wonderful new film Power in Our Hands, telling the story of a hundred years of the Deaf Community, featuring old film and interviews with leading Deaf activists. A full house watched this stirring documentary, which was accompanied by the premiere of a Devon made short film, Jabber Wocky.

Jabber Wocky is an original short film in BSL and the work of Clare Seal, BSL/English interpreter and Matt Jenkins, actor and teacher. The editing was done by Aidan Green and the music was specially composed by Will Odgers, musician and member of Count to Fire. Sound was produced by Jolyon Holroyd, talented audio genius, who has worked with The Stranglers, amongst others. Jolyon also took the black and white photo showing Will being recorded playing live to the edited film to make sure the timing was perfect. 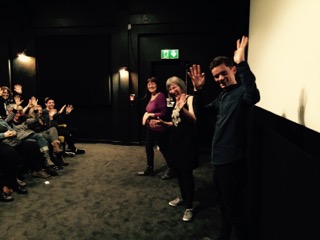 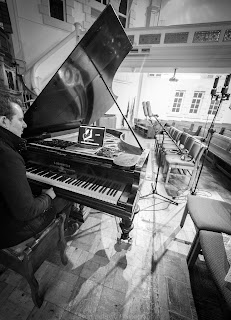 Carolyn Denmark, Matt Jenkins and Clare Seal at the end of the Q & A. 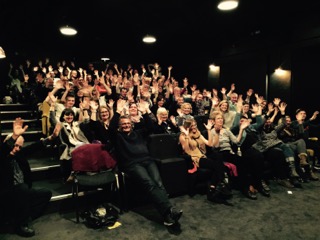 A happy 'clappy' audience (clapping by waving as per Deaf culture). Colour photos by the BDA with huge thanks.
Posted by Clare Seal at 09:25

Based in Devon and experienced in most settings with a particular interest in the arts having a background in the creative industries herself. Book her services by email on clareseal@hotmail.com or phone 07751 032 523.